Highs and Lows of December Retail 2018 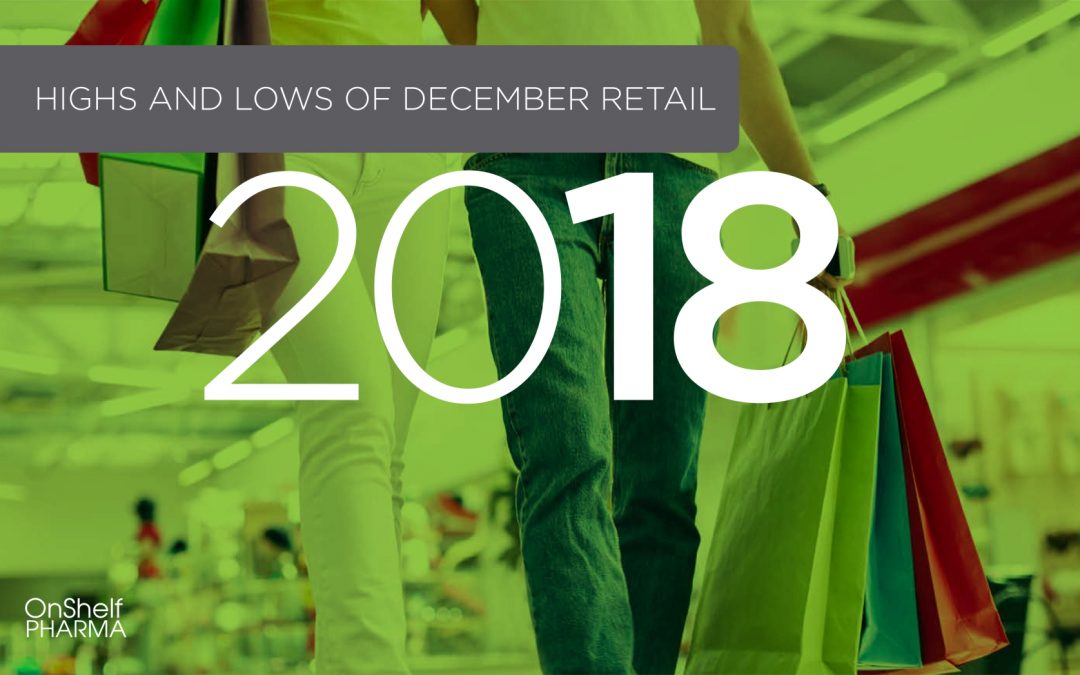 December retail figures from the US, UK, China and South Africa differed widely and are, more than ever, relative to the prevailing politics and consumer confidence in each area. The US reported record sales during the festive season and it seems consumer buoyancy has yet to catch up with what’s happening in the global marketplace. In the UK however, December 2018 caps the worst retail year in more than a decade.

While BBC News reports global markets being at their worst since 2008, rather surprisingly, US holiday shopping was at its best in six years, according to Reuters and a report from Mastercard. Sales rose 5.1% to over $850 billion with confidence buoyed by Amazon.com Inc’s announcement that it shipped a billion items for free via Prime Membership. Amazon also said it had a record-breaking season, with shares up as much as 5%.

The surge in US sales can be attributed to consumer confidence, linked to low unemployment rates and higher wages. Online sales rose 19.1% – published in a SpendingPulse Mastercard retail report, and Steve Sadove, Senior Adviser for Mastercard said, “From shopping aisles to online carts, consumer confidence translated into holiday cheer for retail.” Amazon’s CEO Worldwide Consumer, Jeff Wilke, was also positive, saying: “This season was our best yet.”

In the long term climate, however, as Huffington Post’s Dominique Mosbergen suggests, analysts are concerned that the retail surge may “stall” in 2019 as political issues and activity on Wall Street drag the US economy down further.

Bloomberg reports 2018 to be the worst year in more than a decade for U.K. retailers and end of year figures from the Centre for Retail Research show 148 132 jobs were lost and almost 20 000 shops and restaurants closed their doors. This reflects consumers more cognisant of politics, including Brexit contingency plans and stockpiling goods, these things are already costing retailer’s money and consumers are “reining in spending”.

Footfall traffic, for example, declined by 3% on Boxing Day, compared to 2017, the third annual fall in a row and Springboard Retail Intelligence reports, “Part of the reason for the drop in footfall is the almost continuous discounting that has been taking place by retailers this year – particularly over the period from Black Friday onwards.” In addition, there’s increased pressure from online sales giants such as Amazon. Overall, sales at U.K. brick-and-mortar retail stores fell 1.9% in December on a like-for-like basis, with store revenue declining 9.2% in the nine weeks before 29 December 2018.

According to Money Web the Chinese economy slowed again in November as retail sales and industrial production weakened. Retail sales, in particular, which have been a major pillar of support for the Chinese economy – have shown the weakest performance figures since May 2003. In addition, Chinese stocks recently fell along with the currency, signalling “a deepening slowdown”.

That said, the figures for China’s Singles Day on 11 November 2018, according to Mckinsey,  make it the largest “shopping spree” the world has ever seen. Customers bought US$45 billion worth of goods and services within 24 hours – “three times this year’s Black Friday and Cyber Monday online sales combined.” Of interest to retailers looking to 2019, 90% of the transactions done on Singles Day were via mobile, so we have some catching up to do.

“The country that already has the world’s sixth-highest rate of unemployment could well move up to first place.” SAFTU (SA Federation of Trade Unions)

The biggest SA Festive Season retail story was the threat of Edcon closing its 1350 stores and putting 14 000 permanent staff and 25 000 temporary employees out of work – the single biggest loss of jobs in SA history, according to SAFTU. The closure of Edcon would also impact highly on shopping malls as their stores take up approximately 10% of the occupancy in our main shopping centres.

But it’s far from only doom and gloom with Statistics South Africa reporting in November that the overall the economy grew by “2,2% quarter-on-quarter in the third quarter of 2018, bringing to an end the country’s second recession since 1994”, with the main growth industries being manufacturing, transport, finance and business services. Looking further afield the good news in Africa is the continent generated US$16.5 billion in revenue in the e-commerce sector in 2017 and has a forecast revenue of US$29 billion by 2022.

“As humans, as teams, we are interdependent.” OnShelf Pharma

In general, customer expectations are growing exponentially all around the world. In 2019 the consumer will demand better value, quality, convenience, authenticity and connection. In addition, businesses and leaders will need to be more accountable as brand integrity will be under close scrutiny. Anyone ticking all these boxes is in with a fighting chance of success during the year ahead.